The Concept: From Several Paths, One Need Emerges 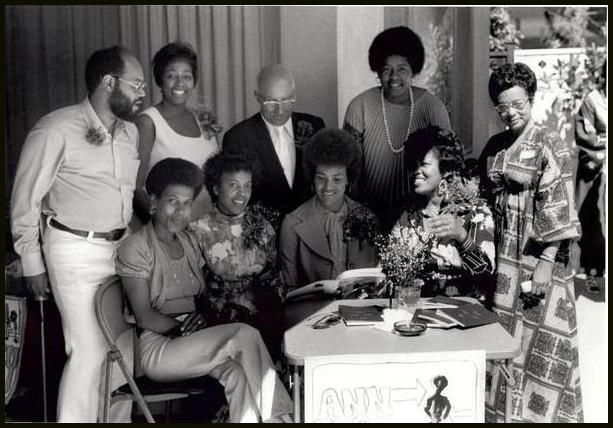 Two events provided the impetus for the development of an action-oriented statewide organization to serve as a professional agency for African American librarians.

In 1970, James E. Crayton began his research on discrimination practices operating within the Los Angeles County Public Library System. By January 1971, armed with his findings and the identification of discrimination against minority librarians, he and two other County librarians — Louise J. Moses and Joyce Sumbi — took steps to file a class action suit with the State’s Fair Employment Practices Commission.

The Formation: One Mission

Following the filing of their class action suit, Mr. Crayton, Ms. Moses, and Ms. Sumbi were in constant communication with the officers of the Black Caucus of the American Library Association (BCALA). The group was referred to Ms. Carr and Ms. Morris, a founding member of BCALA, who were in the process of forming a Black Caucus of California Librarians.

On March 18 and April 22, 1972, Ms. Carr, Mrs. Justice, and Mr. Crayton (who represented Ms. Moses and Ms. Sumbi) — from the Southern California area — and Ms. Morris, Ms. Coleman, and Lucy Wilson (Laney Community College Library) — from the Northern California area — met in the home of Ms. Morris to outline goals and objectives for a statewide Black Caucus. It was determined that simultaneous meetings would be held in the North and South, inviting Black librarians from all types of libraries to attend. Ms. Carr was appointed Acting Coordinator, Southern Area. Ms. Coleman was appointed Acting Coordinator, Northern Area. The meetings were scheduled for Sunday, May 21, 1972 from 2:30 to 4:30 p.m. at Laney Community College Library in Oakland and at Sojourner Truth Home in Los Angeles.

The first meeting of Black librarians, North and South, was scheduled for November 30, 1972, to follow the first general session of the CLA Conference in Anaheim at the Disneyland Hotel. This was the first statewide organizing meeting to further develop and implement goals that had begun on March 18, 1972. After continued meetings in each area and statewide communications, by-laws were adopted in 1974. CLBC became an official statewide organization.

Through the years, the organization strives to adhere to its basic goals: to make the library profession aware of the interests of Black librarians, and to eradicate inequities that affect minorities in the profession and, consequently, in the community. It has done this through nominating and supporting Black librarians’ election to CLA Council and offices; monitoring legislative activities effecting service to and from Black librarians; presenting scholarships to potential Black librarians; promoting Black literature through Authors Autograph Parties; and, participating on library oriented committees at statewide and national levels. The twenty-five years have been well-spent, but continued vigilance is necessary.